I was recently asked to consider my personal life in relation to visual culture. As an artist working in photography, possibly the most democratized art form there is, I am acutely aware of how both my personal life and culture have been influenced by photographic images.

My Grandfather was the first photographer I ever knew. He showed me what it meant to see the world through the camera’s eye and the ideals he and my grandmother instilled in our family help me to see The American Dream is more than myth.  I post this here for him today, on what would have been his 97th birthday, as an examination of the art form I first experienced through his lens and as a tribute to a man who is missed very much. 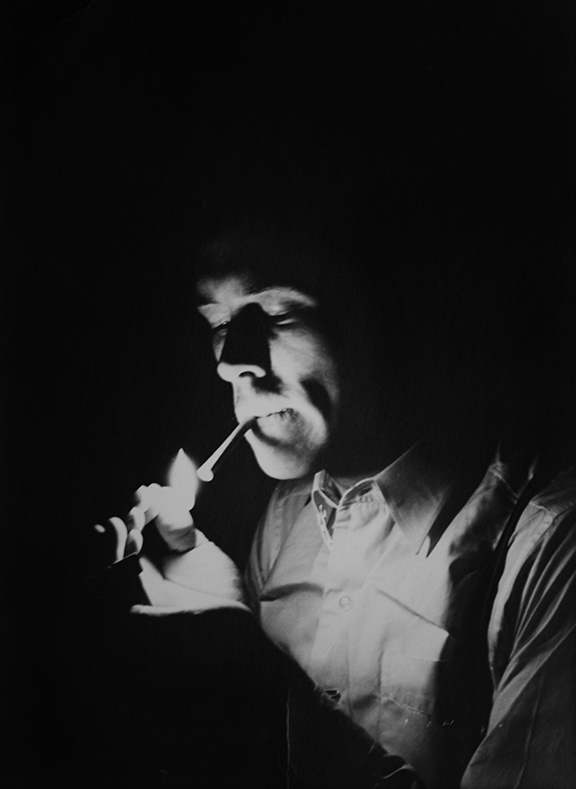 My grandfather’s self-portrait in black and white is a photograph that invokes many romanticized ideals. The year is 1940, “Pop-Pop” sits in a dark, unrecognizable space. He lights a cigarette with a single match, the light illuminates his young face. He is in a country that by the end of the year will enter into a war that will define his generation. He will serve in this war and survive this war. He is three years from marriage, five years from parenthood, twenty-nine years from inheriting the title “Pop-Pop,” fifty-four years from the crushing loss of his wife, fifty-five years from death. When this photo was made so many of these things were unknown and yet to be. When I look at this portrait I take it in with the full context of his life, yet through a filter of love and time.

I see a Norman Rockwell-esque existence through this image. This self-portrait conjures up Rockwell’s well known Triple Self-Portrait. This self-portrait, made twenty years after my grandfather’s, depicts another white American, middle-class male in a button down shirt with his tobacco delivery system of choice hanging from his lips. Both images feel warm, comforting and safe. They inspire thoughts of The Greatest Generation, a group of people that acted out the American Dream, giving birth to nuclear families and living “happily ever after.” Education and experience has taught me that these notions are mostly ideological constructs; constructs that in recent years have been referenced in the mythic speech of political campaigns reminiscing on a bygone American culture. However, these ideals are part of my foundation and relationship to family, American culture, art and most specifically my chosen field in the arts, photography.

At first, photography was a way for me to share what I believed to be my unique vision of the world. I would take close ups of old furniture, highlighting the intricacies of form, I captured breathtaking landscapes in filtered autumn light. I looked to the photographers who influenced my grandfather’s generation’s relationship to country. Ansel Adam’s dramatically grand American West landscapes, Paul Strand’s quaint New England views, Dorothea Lange’s and Walker Evan’s depictions of worn yet resilient migrant families all drove my desire to capture the monumental and familiar details of my culture.

My grandfather’s photographic ventures did not end with one self-portrait. There are many images, the majority are of my own family, each photograph depicting a suspended moment. For me, all of these photographs are fragments that piece together a romantic notion of life in the Golden Age of post World War II America. I have always tried to find and hold onto these notions in everyday life. I am a romantic and this way of relating to life undoubtedly comes from my family and the preservation of our best selves through family photographs.

In my early years as a photographer I searched to find and maintain this romantic myth of my culture. This was not always easy to achieve in an academic climate. When I earned my first master’s degree in photography I began my studies at the age of twenty-four, the same age as my grandfather at the time he created his self-portrait. I was heavily criticized by my peers and instructors for my mystified approach to making photographs in the style of the modernist photographers of the 1930s and 40s. I was attempting to resist the demystification that came with acknowledging that the society of my youth was not always good and wholesome. I was searching for threads of these ideals to grasp onto in order to maintain an innocent view of my life. I have since transitioned from being an artist who holds on to the ways of the past to inform my views of the present, to an artist who examines how the myths of my culture have informed my self-identity. Within this motivation to critique culture is forever a longing for re-mystification, a wish that an innocent understanding of the world could be regained and become fact. Was the Golden Age of my grandfather’s generation formed out of this same longing? Perhaps the pursuit of the American Dream was The Greatest Generation’s effort to undo the demystification brought by The Great Depression and World War II.

I believe each generation suffers their own social and cultural demystification. For my grandfather it was The Great Depression and World War II, for my parent’s generation it was the assassination of Kennedy and the Vietnam War; for my generation it was the events of 9/11 and the war on terrorism. These are all events that challenged our perception of life. What role has photography played in shaping these perceptions? Just one individual photograph of a man in a darkened room lit by a single match has contributed to my understanding of post World War II America. I think of many photographs depicting the generations that came before me that hold a certain amount of mystery and nostalgia created through my distance from the time period in which the image was made. My relationship to these photographs instills in me a greater responsibility as both a photographer and art educator. The context of time, culture and society must be ever present in the consideration of the arts and media. We may connect with that which is idyllic and iconic in photographs from the past yet we must be conscious of the challenges and realities any generation faces. We must do this so that the myths of each generation do not singly define our individual selves or our society.

In the year before my grandfather passed I shared with him some of my first photographs, ones that were heavily influenced by his approach to the medium. Much of my grandfather’s pride in the life he had worked hard to establish slipped away with the death of my grandmother; it was hard for him to express anything but sadness. Still, we were able to connect through our love of a technically precise, classically composed photograph. Self-portraits are now my dominant approach to photography. I do not know if what compelled him to turn the camera on himself seventy-two years ago is that which drives me to do the same. Yet, the lens that sits on my camera is the very lens he used. Time and life may have changed my relationship with photography but at the heart of the work the bond remains the same.

2 thoughts on “Photography and Culture, for Pop-Pop”